Conclusions: Use of OrthoK may help reduce axial length elongation in myopic eyes. Age of the initial treatment is a key factor. The baseline of cornea curvature and duration of the wear are not directly associated with treatment outcome. Of note, during the three-year study, 65.5% of treated eyes (n=127) showed a minimal or clinically insignificant increase of axial length (<0.5mm). Early treatment should be considered.

The prevalence of myopia in the United States and throughout the world has increased dramatically over the last 30-40 years. The National Health and Nutrition Examination Survey of the US population, conducted from 1999 to 2004,reported the prevalence of myopia to be 42% of individuals in the 12 to 54-year-old age group, compared to 25% for the same age group 30 years previous.1,2In Singapore and Taiwan, prevalence has been estimated at 80% of young adults.3Within the next five years, it is estimated that myopia will affect nearly 2.5 billion people worldwide.4When myopia is initially seen in children 4-9 years old, it often progresses substantially during growth years that follow.3The increasing rate of myopia prevalence has been linked to both genetic and environmental factors. A child’s risk of developing myopia increases threefold if both parents are myopic.5,6 Two independent research groups, using genome-wide association studies, have identified 20 genetic loci that have been linked to myopia.7 Environmental factors such as long periods of near work, type of optical correction, and limited outdoor time also affect myopia development.8-11 One study reported that increasing time spent outdoors can delay the onset of myopia.12The complex nature of the genetic and environmental interactions that contribute to myopia progression is a topic of ongoing studies worldwide.

Identifying ways to prevent or reduce myopic progression are important to eye care providers as well as patients and parents of myopic children. Substantial increases in axial length and the resulting myopic progression requires repeated refractive corrections during childhood, and places those with higher myopia at risk of sight-threatening complications such as maculopathy, retinal detachment, cataracts and glaucoma.13-17Once myopia develops, various methods of slowing its progression have been attempted in conjunction with clinical testing of these methods.11,18-20These include pharmaceutical agents such as atropine, multifocal spectacle lenses, specially-designed soft contact lenses, rigid gas-permeable contact lenses, spectacle under-correction, and OrthoKeratology (OrthoK).11 OrthoK is the application of specially-designed, reverse-geometry, rigid-gas-permeable contact lenses worn only while sleeping to temporarily reshape the cornea, such that refractive error is corrected without the need to wear any correction during waking hours. To date, numerous clinical studies have reported a beneficial effect of OrthoK on slowing or stopping myopic progression.20-25OrthoK requires adherence to prescribed wear time, and children in one retrospective study were shown to be very adherent to the prescribed OrthoK wearing schedule.26

Although some clinical studies evaluating myopia progression have used change in cycloplegic refraction (objective and/or subjective) as the outcome measure to determine if refractive changes have occurred,11others used change in axial length as the outcome measure of growth-related refractive changes.27, 28The advantage to using axial length is twofold: axial length is an objective measure and has been associated with complications of myopia.14-17In this observational study, we evaluated children who have worn OrthoK lenses regularly for three years to analyze changes in axial length and refractive status after commencing use of OrthoK. We performed this study to demonstrate results that could be expected with typical myopic patients presenting to practitioners in clinical practice. This large case series represents a sample of a common demographic seen by practitioners prescribing OrthoK in the United States.

This study was approved by the University of Michigan Medical School Institutional Review Board (IRBMED). This was a retrospective study evaluating data from patients in the practice of the first author (MJL). Patients whose records were selected for analysis in the study included those who began regular wear of OrthoK lenses between April 2007 and October 2011, were 7-14 years old, had myopia between -1.00D and -6.50D, had less than 2.00D of astigmatism, attended routine follow-up care at recommended intervals for at least 3 years after commencing OrthoK wear,and did not wear spectacles at any time.

Subjects excluded from analysis included those who had not worn OrthoK lenses regularly (stopping for more than two weeks), had annual exams greater than 15 months from baseline or previous annual exam, or who were diabetic. Refractive data were based on subjective manifest refraction. Axial length was measured with a hand-held MMD PalmScanA2000 (Calabasas, CA) ultrasonic A-scan. This device has been validated as accurate in a previous study29thatfollowed an identical protocol by the same operator (MJL) for all axial length measurements. Corneal curvature was monitored with manual keratometry and corneal topography with CarlZeissMeditec(Dublin, CA) - Humphrey Atlas 993 or Medmont (Nunawading, Victoria, Australia) - E300.

Baseline information obtained at the time of initial presentation for OrthoK evaluation and fitting included the subject’s age and the following for both eyes of each subject:

Descriptive statistics of the sample were summarized with means and standard deviations (SD) for continuous measures, and frequencies and percentages for categorical measures. Mixed linear regression30 was used to estimate the effect of covariates on axial length change from baseline over time (yearly up to 3 years). This model accounted for the correlation between the two eyes of a subject and the correlation within a single eye over time. The following variables were investigated for a relationship with axial length change: age at start of OrthoK, baseline measures of the eye (spherical component of myopia, cylinder, flat K reading (manual and simK), steep K (manual and simK), shape factor (eccentricity), pupil diameter, corneal diameter), time-varying measures of usage (hours/night and nights/week of contact wear), and location of treatment zone (from topography).Note: Flat K reading is the least curvature measurement in a particular meridian of the cornea taken from manual keratometry and from topography. SAS version 9.4 (Cary, NC) was used for all statistical analysis.

141 patient records were screened for study participation. Of those, 44(31%) were not eligible. Reasons for exclusion included: lack of compliance with follow-up schedule (n=14), missing data (n=9), less than 3 years of follow-up (n=2), started OrthoK elsewhere (n=5), no baseline axial length data (n=12) and discontinued OrthoK (n=2). 97study participants (194 eyes) were included in the data analyses. Ethnicity of the subject population was Asian (n= 88, 90.7%) and Caucasian (n=9, 9.3%). Baseline descriptive data on eyes are detailed in Table 1. Mean age at start of OrthoK was 10.4 years (SD=1.9).OrthoK lenses worn by the subjects were of four different designs: CRT lenses (Paragon Vision Science - Mesa, AZ) were used in 128 eyes (66%), CRT-Dual Axis Lenses (Paragon Vision Science - Mesa, AZ) were used in 20 eyes (10%),Emerald lenses (Euclid Systems – Herndon, VA) were used in 20 eyes (10%), and custom-designed OrthoK lenses were used in 26 eyes (13%). The various lens designs were used to achieve optimally centered treatment (defined by post-treatment topography) and best unaided visual acuity during waking hours. Study subjects wore the same lens design in each eye except for one subject, who wore a CRT lens in one eye and a CRT-Dual Axis lens in the other eye.

This case series represents a large group of children treated with OrthoK and followed for three years to monitor changes in axial length. Axial length changes were evaluated in the context of other factors, such as age at start of OrthoK, initial refraction, pupil size, corneal topographical changes, lens design, and wearing time. These factors are listed in Table 3.

Axial Length Changes with Other modes of Correction

It is notable that 91% of our study participants were Asian Americans. Asian children have been shown to develop myopia at younger age and progress at a higher rate than other ethnic/racial groups.31,33,34 This may relate to differences in posterior scleral/retinal contour and the resulting difference in peripheral refraction.41-43 A recent 3-year study on myopic progression in Asian-Canadian children showed single vision spectacle wearers had a mean change in axial length of 0.82 (SD=0.05) mm over the 3-year study period (an increase of 0.39 mm after one year, an additional 0.23 mm after two years, and an additional 0.20 mm increase after three years).44 The age and ethnicity of subjects in the study was very similar to that of our study subjects.

As a point of reference in evaluating axial length changes relative to refractive changes, Hyman et al 33 reported that a 1 mm increase in axial length was associated with 2.04 D of myopia progression and alternatively, 1 D of myopia progression was associated with 0.50 mm of axial elongation. Those numbers, applied to our study, would suggest that our mean increase of 0.28 mm over the three-year study period would result in a 0.57D increase in myopic refraction.

Studies of Myopia Control with OrthoK

While a previous study of OrthoK wearers48 documented corneal thickness changes, particularly of the epithelial layer, the changes reported in these studies were between 10 and 15 microns, which  are not clinically substantial enough to affect our findings.  Another study showed no significant changes in the length of the anterior segment, which indicates that axial length measurement should be a valid method to monitor myopic progression in children undergoing OrthoK.49

The Future of Myopia Control with OrthoK

It is likely that there is more involved in myopia control with OrthoK than reshaping the cornea for best central visual acuity. Individually designing OrthoK lenses for optimal myopia control may involve creation of custom lens profiles generated from baseline measurements of posterior retinal shape and peripheral refraction,52-56The ideal amount and location of the  relative peripheral myopia required for optimal myopia control is not known at this time.57 Peripheral refraction was not performed on subjects in this study and the OrthoK lenses used for this study’s participants were not custom-designed based on this parameter. Future study of OrthoK recipients that include collection of peripheral refractive data may reveal why some subjects showed no progression compared to those who still progressed.

Currently, myopic children and their parents who are concerned about myopic progression can consider OrthoK as one option to slow myopic progression. Advantages for children choosing OrthoK over spectacle correction include no vision correction required during daily activities and the slowing of myopic progression. The disadvantages of OrthoK are the ongoing potential for eye irritation caused by debris under the lens while sleeping and potential for variable visual acuity dependent on a specific number of hours of nightly wear of the lenses. Ongoing risks of complications with OrthoK relate to corneal abrasion and microbial keratitis. That said, recent studies have shown that OrthoK poses less risk of microbial keratitis than that of overnight wear of soft lenses.58,59

In summary, use of OrthoK was associated with less axial length increase than historical increases in similar aged children wearing other forms of vision correction to correct their myopia. Age at start of OrthoK was the only clinically significant factor associated with axial length changes during our three-year study. Because of the lack of concurrent controls in our study, and  comparison of 3 year results with outcomes from populations that differ from ours, conclusions should be viewed with due caution. Our retrospective study showed  the mean change in axial length in OrthoK wearers over a three year period was an increase of 0.28 mm. Additional study of peripheral refractive profiles of children being treated with OrthoK will add to our understanding of the ideal peripheral refractive profile that may stop or slow myopic progression even more effectively. For now, use of OrthoK slows myopia progression for the majority of children.

outdoors and myopia in children and adolescents. Ophthalmology 2012;119:2141–

Written by Eef van der Worp, published in his Eef@online series at Linkedin What has... Read More

This is the complete Interview with IMC 2019 President Kyoko Ohno-Matsui, made on the last... Read More

We sincerely thank you for your confidence in our project and wish you a Merry... Read More

There are many health benefits to kids playing outdoors, not the least of which is... Read More 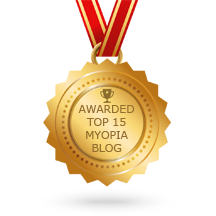